Yesterday, I documented in a somewhat disjointed fashion my latest trevails in bread making.  I am pleased to report that the No-Knead Bread experiment was a resounding success.  Exhibit A. 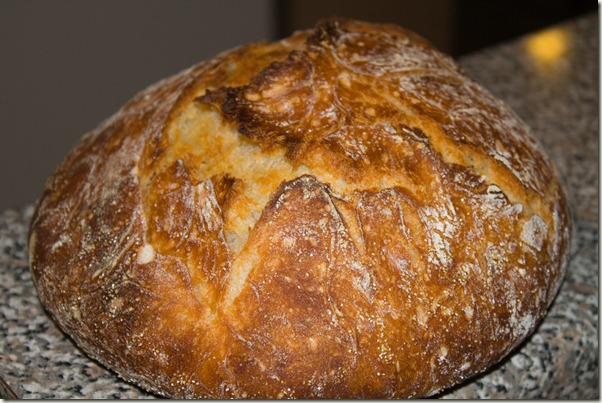 The loaf is crusty and chewy on the outside, with a soft, pleasant interior and a rustic larger bubble structure, like a good artisan loaf.  Despite the fact that I had to stay up until 1AM to finish the loaf because I got distracted by Assassins Creed 2 on the Xbox, it was well worth the minimal effort necessary to make this bread.  In fact, I have decided that, from now on, I will no longer buy artisan bread from the store.  It’s just WAY too easy to make this bread.  And, for about $0.50, I was able to make bread that would cost me $5 to buy.  And it was actually better.

How do you do it?  You will need a very small bit of specialized hardware for this project.  But fortunately for you, it is very cheap.  Exhibit B. 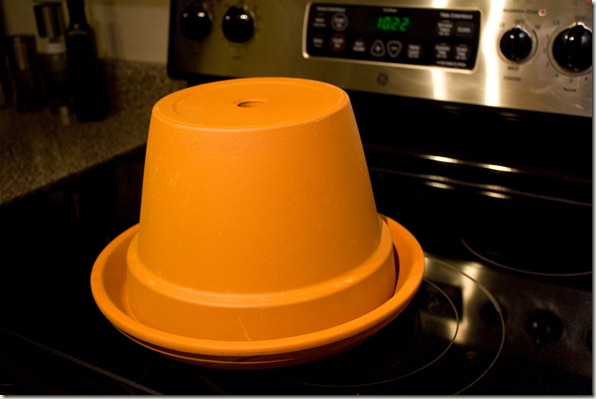 This is a 10" unglazed terra cotta flower pot with a 12" terra cotta saucer that I got from the garden section of my local Fred Meyer.  Together, the two of them cost me $11.36 cents including tax.  You may even be able to find them cheaper at a certain evil company whose name rhymes with Sprawl-Mart.  This will be the baking vessel.  You want to make sure that you get the UNGLAZED terra cotta.  And make sure you wash it thoroughly before you use it to bake, please.  You could also use something like a lidded ceramic dish or cast iron Dutch oven.  It’s got to be something that can absorb and hold heat and distribute it evenly.  It also must be covered.  More on that later.

You will also need to get a couple of non-terrycloth towels, preferably cotton.  I used my pastry fabric for rolling out pie dough (best thing EVER for pie dough), but if you don’t have that, a basic tea towel will do.

And that’s it.  The trick is in the technique.

First, you’ll want to put all the dry ingredients together into a large bowl.  Using a fork or whisk, stir them together to evenly distribute the yeast and salt.  Then add the water and stir until combined.  The dough will be very wet and sticky.  That is by design.  Put a sheet of plastic wrap down on the dough directly, and place the bowl in a standard 70 degree(ish) room.  I used my laundry room, which was a little warmer because the dryer was running.

A quick food science lesson: What makes good crusty bread good is gluten.  It’s a substance that’s created when the protein in the wheat flour is mixed with water.  When making bread, there are two ways to encourage the formation of gluten.  Traditionally, when you want to get a great, crusty bread, you knead the hell out of it.  Most recipes for artisanal breads say that you should knead the dough for 30 minutes by hand or 15 minutes if you’re using a stand mixer.  Then you let it rise.  Punch it down and knead it again.  Let it rise again, then bake it.  Well, there’s another way to generate gluten in your bread dough: time.  Gluten will generally form if given enough time…even if you don’t knead it at all.  With bread, however, the difficulty is giving the dough enough time to generate gluten, but not so much time that the yeast can take over and turn your dough into the Blob that Ate Tokyo.  That is why, for this recipe, there is such a minute amount of yeast.  If you were to put in a full packet of yeast, the dough would balloon up in a couple of hours, and the yeast would have eaten through all the food in the dough before there would be enough time for the dough to develop adequate gluten.  With such a small amount of yeast, the dough rises very slowly, allowing the dough time to get all gluteny.  And no, gluteny is not a word.

The dough for this recipe must sit for 12-18 hours…18 being preferable.  I had originally planned on letting mine rest for 12 hours, but because I forgot, it got a 14 hour rest.  During that time, you’ll find that the bread will also develop the kind of flavor that most non-sourdough breads simply can’t match.

When the resting period is up, dust your bench and your hands with an ample amount of flour and turn the dough out onto the bench.  Simply fold the dough in thirds, turn it 90 degrees, then fold the dough in thirds again.  Then form the dough in a ball by tucking the edges of the dough underneath until you’ve got a nice skin on the top of the dough.  Spread out one of your towels and dust it with a little cornmeal.  Place the dough on the towel seam side down, dust it with a little more flour, and cover the whole thing with the other towel.  Let it rise for 2 more hours.

Because of my poor time planning and easy distractibility, I was unable to let my dough rise for the full 2 hours.  I set mine aside for about 50 minutes.  The final product was a little more dense than I would have liked, but it was still delicious.  I’m certain that if I had allowed it to rise the full 2 hours, it would have been perfect.

About 30 minutes before the final rise is complete, put the terra cotta pot inverted over the saucer (like in the picture) into a COLD oven and preheat the oven to 450 degrees.  I will take a moment to remind you AGAIN that you should never rely on your oven’s thermometer to be accurate.  Spend the $10 and get yourself a little oven thermometer.  You’ll be glad you did.

When the time comes to bake the bread, open the oven, remove the terra cotta pot, and set it aside.  (ON A HOT PAD, PLEASE!  YOU’LL MELT YOUR COUNTERS OTHERWISE!)  Remove the top towel from the bread, then slide your hand under the bottom towel and pick up the dough ball.  Turn the dough upside down and place it in middle of the saucer.  For those of you keeping track, that means that the seam side will now be facing up.  It’ll look a little strange, but that’s fine.  Replace the pot on the saucer and close the oven.  Let the bread bake for 30 minutes.

After 30 minutes, remove the pot and let the bread continue to brown for another 10-30 minutes.  Remove from the oven and allow to cool at least a little bit.

Cut, slather with homemade peach jam, prepare to meet your maker in ecstasy.

Now, I want to point out that this is a long post with VERY detailed instructions.  Much like my post about the Ultimate Chocolate Chip Cookies (which BTW, has driven more traffic to my blog than anything I’ve ever written except my post about mommy bloggers) I wanted to be very specific with the instructions, even though the actual application of those instructions is quite simple.  Give it a try.

By the way, if you’re not particularly thrilled about the idea of having a terra cotta flower pot sitting around in your kitchen, don’t forget that the saucer can be used in the same way a pizza stone is.  Great for cookies, pizzas, and you can also use the whole pot for slow-roasting meats.  (You’ll just want to use a glass dish inside of the pot to hold the juices).

So, that’s the awesomeness of no-knead bread.  Thanks to the New York Times for the basic recipe, and to Alton Brown for the understanding of the science.  And now, I’m off to make a grilled peanut butter and banana sandwich with cinnamon and brown sugar on homemade bread.  The King still lives!